There was a fire in Biddeford Maine the other night.  There are several reasons why I am going to tell you about it.  For one it was strange the way we happened upon it.  Which is not surprising, strange things happen to me during the month of October since I was a baby.

That morning my husband was talking to his buddy about how his house burned down which lead him to need fire insurance.  Later that evening my husband and I went off to Walmart to pick up some small items.  On the way we talked about the price of gas (we stopped and got some because the price was SO low).  During checkout  I insisted to stand in line behind a man who was dressed rather interestingly so I could check him out.  It happened that he was buying a tarp.  That's it just a tarp.  My conclusion was he was part of the homeless duo when we first pulled in.  That tarp was most likely his shelter from the pouring rain that night.  In line I was contemplated purchasing a lighter for our reinvented emergency kit.  The kit isn't done yet so the contents are not that important at this stage.  So big deal:  There were two conversations, a lighter, a tarp and homelessness.

On our way home we were rerouted due to sirens and flashing lights.  WE ARE NOT ambulance chasers by any stretch of the imagination.  I don't watch the news.  In fact I shelter myself from this sort of thing religiously but we easily pulled over parked right in front of a bar and proceeded to head toward the disaster.  What we saw was quite the scene, a scene that involved gas, a tarp, a lighter and 8 left homeless.

We saw extremely strong men and women preform exhausting work which saved lives of many including a cat.  As far as the real reporting goes a young man and his girlfriend were driving past when they saw flames and smoke with an elderly woman screaming for help.  This couple took it upon themselves to call 911 and run into the building to carry the woman to safety.  When the young man heard that a man had died in the fire he quickly felt as though he failed at saving more.  It must have been a relief, if you will, when he found out the man who had perished committed suicide by means of dousing himself with gas and lite himself of fire.
While we were there shooting photos we saw a lot.  A wife dusting off her man's soiled mask. Another giving water after he painstaking saved a cat and one firefighter rubbing the back of another as he struggled to gain his breath.  Including the bar that we parked at's owner, Pete, handing out hamburgers to hungry dinner time fighters.  As we drove a way he was rather humble when I introduced myself telling him that was a sweet thing he did.

Next time you drive past your fire station, drop in to say hi perhaps you could brings some cookies.  I think they'd like that. 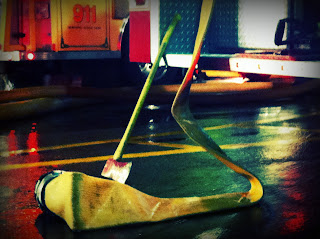 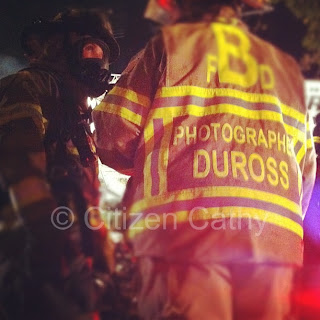 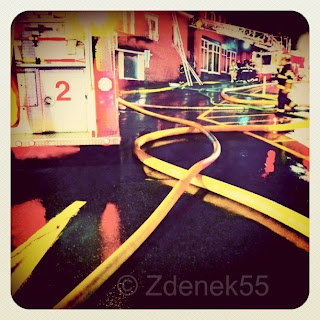 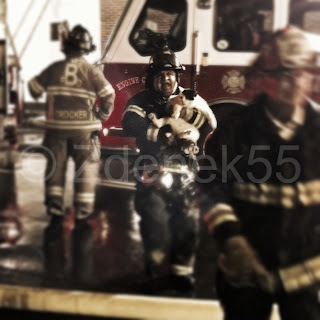 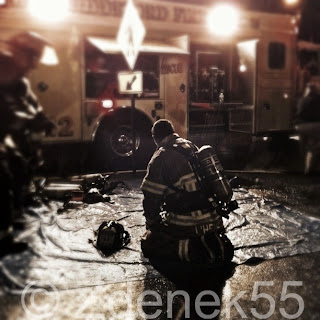 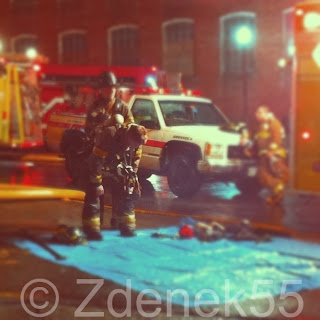