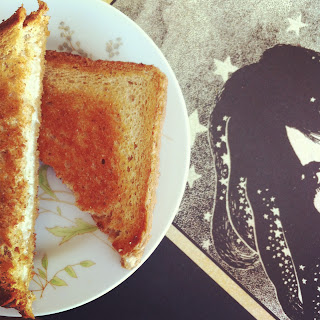 While I was growing up a boy two years older than me asked me out.  He liked me.  He asked me at least 3 times to attend a Grateful Dead show with him.  Each time I refused his advances.  Entering into adulthood, I was 20, he was 22 and still on the road attending numerous events which included the segway of Phish.  I still had no interest.  We all grew up and my interests began to peek surrounding my friends and what they did there.  What was the allure?  "You all go as a group" What was the fantasy all about?

One year my stepfather gifted my husband, then boyfriend, and I tickets to The Great Went a Phish Concert in Limestone, Maine.

We went.  It took hours upon hours to get there.  Perhaps 8 or more.  We were all crushed in a van.  It began to rain.  Then pour!  When we finally arrived we were unable to get out to stretch.  It was pouring.  Daybreak the next day, sunshine.  I met a jogger.  He introduced me to Rice Milk.  I walked around.  It was ok, it was difficult to focus on one thing or understand what was happening.  The night fell the concert came, it was ok.  I went back to my tent early.   I could not find my groove.  The next morning we woke.  I searched out a bathroom.  All the porta potty were full.  Like overflowing full.  Literally!  It was nasty.  And this was a time before hand sani.  Perhaps people were a bit cleaner then too.  I've learned some bacteria is good.  Some!  There is good bacteria.  anyway...

People began to use the outer rim of the brick building across the fence.  You could see piles.  1000's of piles of crap!  It must have tiered out in 10 rows.  It was disgusting.  Later that day a man came to me with a flyer asking if i would join in on a group photo in the nude.  I thought to myself, you mean with all the people that have been shitting themselves in public for the last 48 hours.  You want me to lie down with them with no barrier to protect me from the ....  um, wow, um,  No.  I sound like a snob but of course I was all curtsy and kind.  I took the flyer, hugged him, he was not hearing a word of my thoughts.  I am spinning a humoric tone to it.

Then I got hungry.  Real hungry.  We took a walk.  Every single tom, dick and hairy was cooking something up.  Here's the clincher.  I had one of the best vegan burritos of my entire natural born life that day.  I still water when I think of it. It was made in a 10 gallon bucket with a every ingredient possible getting stirred with a large mallet. (i wouldn't repeat this today) But that day I was elated, well and recuperated.

That night I skipped the show.  I went out for more offerings.  I went out for more people.  I came across a sweet thing making grilled cheeses for a dollar.  She sprinkled pepper on it.  I thought huh.  Then she sprinkled garlic.  Then she said "oh I'm out of America cheese, doll.  This is Swiss."  I think I made love to that sandwich it was sweet, hot and had a bite to it.  And perhaps I felt naughty because I was eating "dirty hippie" food and shy because she was gorgeous.