This post was going to be about this and that and sharing the year with you via best photos, favorite times and my thankfulness for a wonderful month.  BUT as the bell tolls ambitions sway.  I am in no mood to recap.  I also lost 3.5 hours doing something rather interesting this afternoon.

This is how it goes.
The Post Office closes at noon today, new years eve 2012.  I spent most of the morning wrapping.  My husband and I decided to use one car for the winter.  We had a very busy month so we didn't bother uncovering our second car from the two storms we just had.  BAD idea in New England.  Cars like to be purred up each day.  I know I know!   I have learned a lesson this month, THIS YEAR!  Seriously this month is the beacon to the other 11 months.

Anyway.  My husband decided to take a lunch break at 11:00 to bring me to the Post Office.  A little treat!  I heard him beep on the main road so I promptly hung up my phone call to dress.  Minutes passed.  I looked out the window to the drive way but didn't see him.  I though perhaps that was not him.  Seconds later I was itchy so I looked down the road.  I did see a car at the end of it but thought it was my neighbor parked in the street.  I exhaled an "ok" as I walked down to the workroom that is where I saw him walking up the devils strip.  Hmmm, that's odd.  Then instantly thought "he had run out of gas again".  He had done so at least 3 times this year!  I ran to the door opened it.  He blurts out "you wanna see something amazing."  Ya, I thought!  I hoped it was a moose.  I thought that maybe I would see my first moose in Maine.  Then in his second breath he said "go have a look at the tire on the car and I'm going in to call AAA."  My heart sunk as I walked directly down the street.  As i got closer you could clearly see the axle had snapped.  The tire had come right off the car!  Metal broken.  He had turned the corner slid and crack.  ON OUR ROAD.  I laughed when I saw it because wow what a sight.  Then moments later I cried.  My husband was home warm and safe.  He drives on the highway EVERYDAY.  If this had happened anywhere but there he would have flipped his car.

Second is you guys.  (my mom too but for sake of sakes its you guys)

So my thoughts turned to my customers.  I have to get to the PO.  Its closed tomorrow.  We just came off a weekend.  Will they understand.  My mind races around customer services 24/7.  Then I thought of our other car buried under 5 feet of shoveled and neighborly snow blown snow.

Two hours later, a broken shovel and wet from tit to toe we had the car dug out.  But we remembered that the last time we parked it it was when he ran out of gas and the only gas in there was from a red little gas can.  It may be frozen. We are batting a 1000 in the human responsibility depot.  But it worked, we got to the station but we missed the Post Office.

I took photos of the wreck.  I had an artsy one inspired by Instagram's catagory #whereistand with my wintery boots and crap wheel but it was black.  All the photos I took came out bad, if at all.  Can you say camera issues!

The lessons I am learning are amazing ones this year.  Ownership, maintenance and adulthood!  They are all very important lessons.   I pray in the 2013 revolution of me that they resonate with grace and radiate a melody off me that inspires others to always maintain a level of what is right and must be done in accordance with the golden rules.  OH but hey

Kim Kardashian is pregnant. that's a good way to end the year! 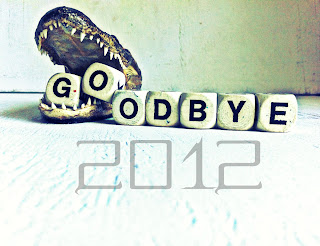 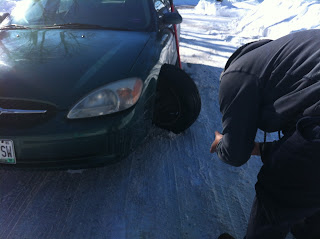