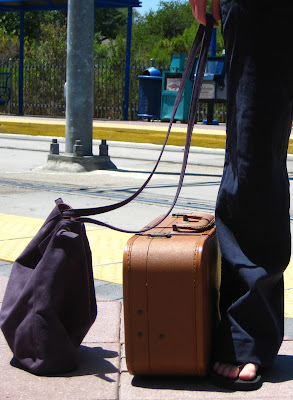 There is something that I envision during less than pleasing times, a suitcase. It hasn't always been a suitcase it has morphed over time. The certainty that it will remain a suitcase is definite.

Back in high school a kid was acting up in class. When the teacher, who happened to be the Dean of Discipline, told him to zip it the kid replied "I can say whatever I want, to whoever I want, whenever I want to, it's my constitutional right ". The teacher's response, I'll never forget it, was "you leave the Constitution on the doorstep each time you walk in here". He went on to explain the how and why of it making perfect sense. Him saying that stuck with me because I literally pictured laying down this big book on the granite stairs leading into the school. The image in my mind manifested to a grand daydream of each student getting to school and leaving their Constitutions. Some were scrolls, large, small, thrown, slammed or neatly piled just so they'd balance to a great height. At the end of the fantasy the books leading to the door was a heaping pile.

Since then I am not sure if this is something that I was taught or it was established by me but it has to do with the curve balls thrown at us while we study the facts of life. Let me explain it as I explained it to my aunt who lived in a spiritual center in the heart of Los Angeles that was open to the public. When she was telling me about her place of residence, a place that suggested peace and community living. She explained that all walks of life live and visit there. Some that are on the path to enlightenment, others whom live gently, others that are searching but as a whole they are people that can feel energies, pass them around and tangibly hold them. There was a slight issue with this because when the public visitors would come in, whom are extremely welcomed, they to brought in their own energy, whether it be excitement, skeptical nuances, fear, jealousy, hurt or depression. She said these emotions would throw the manor off balance a bit. That these particles of spirit would get into the residence and have to be filtered. My suggestion was that the suitcase be employed. Each person that was to enter the facility had to put all emotions into a suitcase and leave it at the front door. It's sort of like taking off one's shoes before entering the home of someone to respect the cleanliness of the floor and in some countries traditional.
Digression. I lived in southern California for sometime and I never let a soul walk into my house with shoes on, I called them City Shoes. They are messy, infected and disgusting.

In my current state of mind each time I get a feeling of inadequacy, grief or loneliness to name a few I nurture the feelings. They are not repressed but rocked like a crying baby to a sleeping baby but sometimes there is one that can not be tamed in a timely manner so I involve my suitcase. Public Speaking is fearful. The old adage of picture them naked doesn't work for me, what is that anyway? So before I would walk into this room I do a small meditation. I see the suitcase, the fear, me physically placing it inside and gently placing in outside the door. When and if any fear arises during said speech I will nurture it by envisioning my suitcase just outside the door that is holding my fear not me.
Email Post
Labels: inspiration my days